The spice and colour of Kuala Lumpur

A weaving of heads, hearts and hands at ISQua’s 35th conference

Above left: Elom Hillary Otchi, Technical Director of the Africa Institute of Healthcare Quality Safety & Accreditation (AfIHQSA) helped drum the next ISQua conference into being. He is photographed with the CEO of COHSASA, Jacqui Stewart, in resplendent Xhosa traditional wear. Above right: Lerisha Mudaliar of the Cape Town Convention Bureau talks to potential delegates at the #Cape Town2019 stand in Kuala Lumpur.
Kuala Lumpur –  a sprawling 243 sq. km urban landscape – is an exciting, first world city but caught in a time warp of architecture. Modern skyscrapers border on Moorish edifices that border on British colonial buildings. The locals are polite and helpful, and they are wonderful hosts. The food is sensational, the city sprawl overwhelming.
The taxi driver who took me from the airport some 60 kms away to Kuala Lumpur (KL) was a chatterbox. He could speak six languages – Bahasa Malaysia (principal language), English, Mandarin, Hakka, Tamil and Hindi. As we approached the city centre of Kuala Lumpur there was no escaping the Petronas Twin Towers. They are quite an exceptional feature, especially when you are eating breakfast at 32 floors up the next morning…

The world-famous Petronas Twin Towers.
The conference was based at the impressive Kuala Lumpur Convention Centre – a massive edifice which straddles one of the more impressive parks in KL. The dramatic atmosphere in the park (particularly during a thunderstorm) is emphasised because the north end of the park is dominated by one of the highest buildings in the world, the Petronas Twin Towers.
Delegates were seen popping into the Suria Shopping Centre at the base of the towers – seven floors of high-end consumer luxury to cater for shopaholics. The more adventurous explored the Batu Caves, where a Hindu temple nestles in limestone.
A wide variety of conference sessions were well attended – either plenary or in smaller conference venues – to learn and share knowledge about the latest theoretical and practical developments in the field of quality improvement, patient safety and external evaluation.
ISQua, which represents 70 countries over six continents, is acknowledged as the global authority that for the past three decades has dedicated itself to promoting quality improvement in health care.  It does this through education, knowledge sharing (the conference being one of the principle vehicles for this), evaluating accreditation bodies and connecting like-minded people through its healthcare networks. It supports health systems worldwide through its extensive networks and continuous work to improve quality in healthcare.
The theme of this year’s conference in KL was “Heads, Hearts and Hands ‘Weaving the Fabric of Quality and Safety’” and true to that theme, every delegate was presented with a gift of the most intricate woven lanyard-style necklace at the Welcome Reception.
It was at this reception that delegates got their first glimpse of plans for next year’s ISQua conference. This time it will be held in Africa, in Cape Town (#CapeTown2019). To promote it, the Cape Town and Western Cape Convention Bureau hosted a stand for delegates to get a taste of what adventures lie in store. The theme for the 2019 conference is ‘Innovate, Implement, Improve: Beating the Drum for Safety, Quality and Equity’.
Many stopped at the stand to trade flyers in their conference bags and business cards for gifts (a clever promotion to create awareness and draw prospective delegates). Some won amazing gifts, like cage diving with Great Whites in False Bay.
But the highlight, from a Cape Town perspective, was the handover ceremony, when the baton for organising and hosting the conference passes from one city and country to another.
Jacqui Stewart, CEO of COHSASA, was determined that the handover would not be lame and so she whipped up enthusiasm among African delegates attending in KL to dance, beat drums and wear traditional African dress on stage. They marched on confidently – appropriately – to the official FIFA World Cup song for 2010, Shakira’s Waka Waka (This time for Africa).
Ms. Stewart also made a short speech, spelling out the reasons for a logical move of the quality improvement focus to shift to the African continent.
As Bill Gates tweeted recently: “I’ve been traveling to African countries regularly for more than two decades. I wish others could come along so they could see what I see: a young continent filled with optimism and innovation.”
There was also short documentary on Cape Town and the Western Cape which should have whet the appetite of the most blasé traveler.
The ISQua 2018 conference in Kuala Lumpur was a great success, with revolutionary content (the role of technology, the role of compassion, metrics, AI, using logical thought to establish effective process) and great speakers. Once again, ISQua pulled it off. CEO of ISQua, Peter Lachman, and his loyal team at ISQua work so hard each year and the cumulative result is that they have created one of the premier events on the global health calendar.
Cape Town looks forward to welcoming health professionals from all over the world in October 2019. (The call for abstract papers has already gone out. Registration can be made online until 18th October 2019). See https://www.isqua.org/events/future-conferences/cp2019.html) 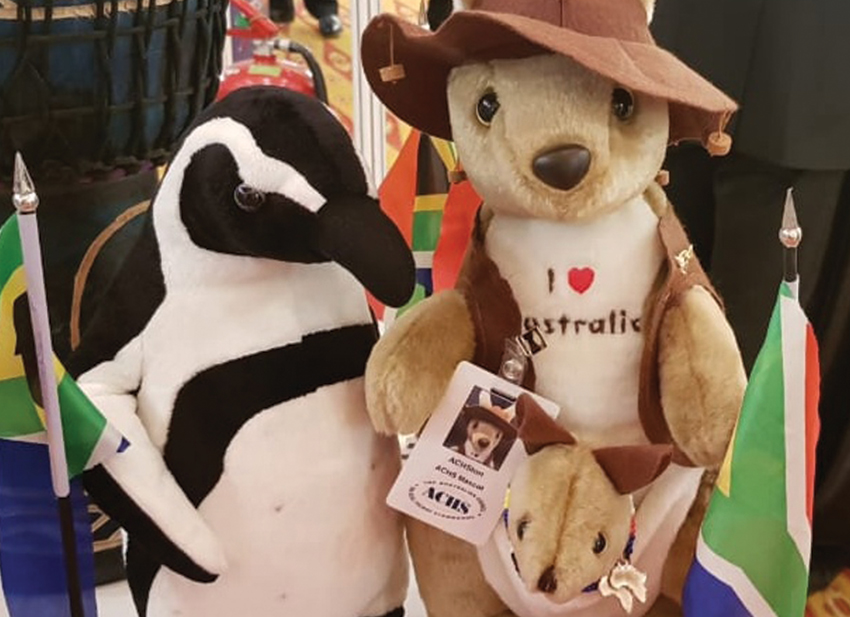 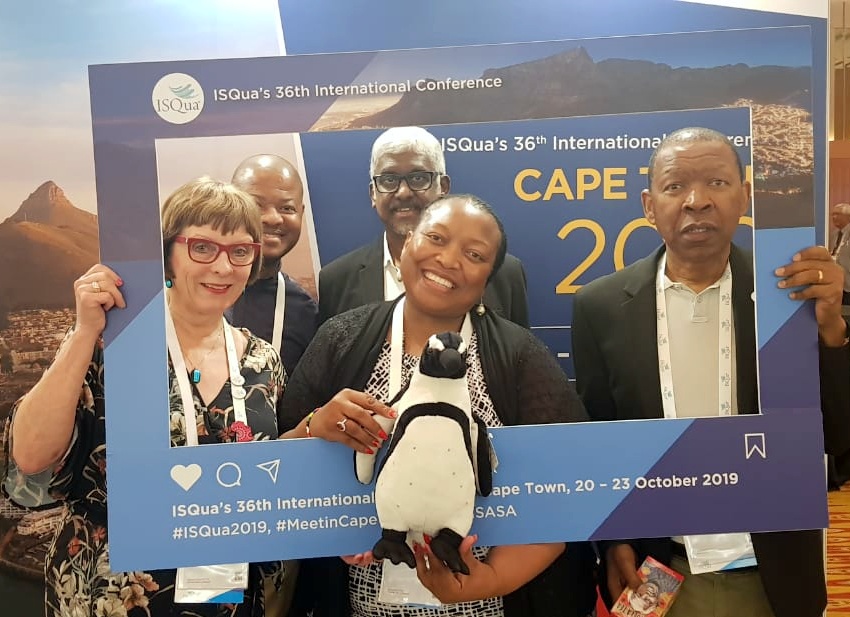 Above: A few members of the African contingent who danced on stage at the beginning of a plenary session in Kuala Lumpur to announce the next ISQua conference in Cape Town in 2019; above left – Pumza the Penguin, the ISQua Cape Town 2019 Mascot, poses with Acshton the Kangaroo, the mascot for the ACHS (The Australian Council On Healthcare Standards). Above right: in the frame for the Cape Town conference next year (from left), Jacqui Stewart, CEO of COHSASA, Mmbangiseni Magoro, Director: Systems Data Analysis and Research at the Office of Health Standards Compliance (OHSC);   Professor Morgan Chetty, Chair of the Independent Practitioners Association Foundation, Dr Siphiwe Mndaweni CEO of the OHSC and Dr Vincent Setlhare, Acting Head of Department – Family Medicine at the University of Botswana.
Youtube link