What our clients say about us

(Above)The South Coast Hospice team and below the late, beloved Dr Andre Nell who saw beyond the wheelchair. 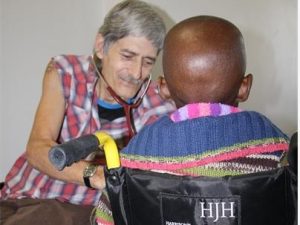 One way to determine if you are meeting your client’s needs is to ask them!

COHSASA decided to find out what one of our most loyal clients, the South Coast Hospice, thought about quality improvement, accreditation and the COHSASA programmes and standards. This is a client that has achieved five full accreditation awards. See Table below.

We submitted pertinent questions to the Operations Manager, Shamila Clothier (viewed as a COHSASA champion who keeps policies and processes up to date) and CEO, Diane Van Dyk, to find out what they really think of COHSASA and its processes and standards and what benefits (if any) they derived from the process.

This is what they said.

When did you first encounter COHSASA?

The COHSASA Accreditation process was launched at the August 2004 Hospice Palliative Care Association of South Africa (HPCA) conference in Rustenburg. South Coast Hospice was part of the pilot project and we had our first COHSASA Accreditation survey in November 2004. We were first awarded an Intermediate Level award but after a focus survey, we were awarded full accreditation in February 2005. We had no prior knowledge of the standards we were to be measured against.

What was your initial response to the standards and the process you were facing?

As we had been chosen as a pilot site, we had a lot of things in place already. However, the initial COHSASA standards that we were measured against were difficult. As part of the pilot development, the South Coast Hospice had been measured against conventional hospital standards. We were an 8-bed patient unit! It was clear the standards needed reviewing and made appropriate for hospices. A Standards Development Committee was established between COHSASA and the HPCA for just such a review.

Did you feel you received adequate support throughout the process?

Yes. HPCA placed mentors in each Province in South Africa to guide the hospices in the accreditation process and how to interpret the standards.

How do you think accreditation has helped you?

The accreditation process has helped us in maintaining high-quality standards in all areas of the hospice, from direct patient care to support services.

What benefits do you think you have got out of the process – both direct and indirect?

Direct – The accreditation process makes us re-evaluate all areas of the hospice and then we can focus on quality improvement and assurance. As CEO, I also believe that the accreditation process acts as a great team builder as all departments are aware of working together to achieve high standards. It certainly allows us all to gain insight into what each department is doing and what they are striving for and this knowledge engenders mutual respect between departments.

Indirect: We have a quantitative evidence base to prove the quality of the hospice services to funders and potential funders.

How do you think patients have benefited from the quality improvement and accreditation process?

The level of care and service is constantly under scrutiny in terms of satisfaction surveys, incident reporting, and file audits. These processes ensure that the patient is always receiving the best quality care.

Although accreditation costs money and is regarded as an investment, do you think you ultimately saved money (over the long run) because of processes and policies that had to be in place?

Not really. The polices are constantly reviewed in terms of changes in legislation and the environment. The accreditation process does cost us money and we must fund-raise for this and include it in our budget. Also reviewing policies, printing and stationery does cost a lot of time and money. However, it is worthwhile investment, to ensure compliance and it also helps guide the process when new staff are recruited into the organisation.

Do you think donors were more attracted to you because of your accreditation status?

YES, and NO. Some donors are impressed, and others are not really interested. We are of the opinion that the donors are not informed as to who COHSASA is. Some donors think that the COHSASA certificate is our registration certificate. South Coast Hospice over the years has had to really adapt to the changing times regarding funding and accreditation keeps us on track.  This is especially true when new staff come on board – it maintains the level of service that is expected from us.

Do you think surveys should be unannounced?

If you could change one thing about the COHSASA programme what would that be?

The hospices must be given an opportunity to comment on the revised standards before they are implemented.