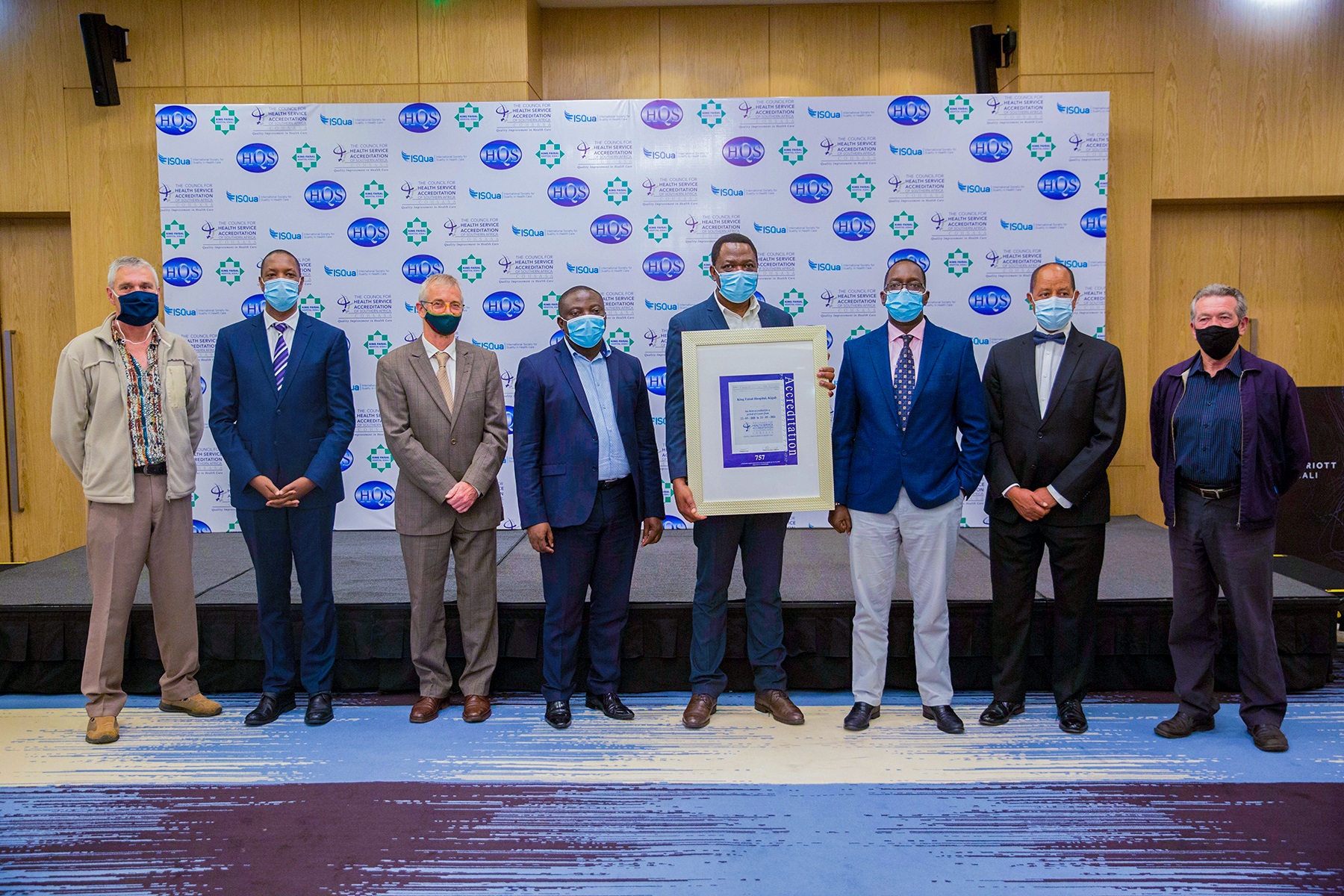 KING FAISAL HOSPITAL KIGALI has become the first hospital in Rwanda to receive a four-year accreditation award from The Council for Health Service Accreditation of Southern Africa (COHSASA). The occasion was celebrated at a ceremony on October 29, 2020 held at the Marriott Hotel in Kigali.

Speaking at the ceremony, the Minister of Health in Rwanda, Dr Ngamije M Daniel, commended the facility on its determination and intent to meet the needs of its patients and exceed their expectations while maintaining a good attitude, empathy, professionalism, accountability and teamwork.

The Minister of Health said the government of Rwanda holds King Faisal Hospital Kigali in high esteem, but that consistency should be observed. 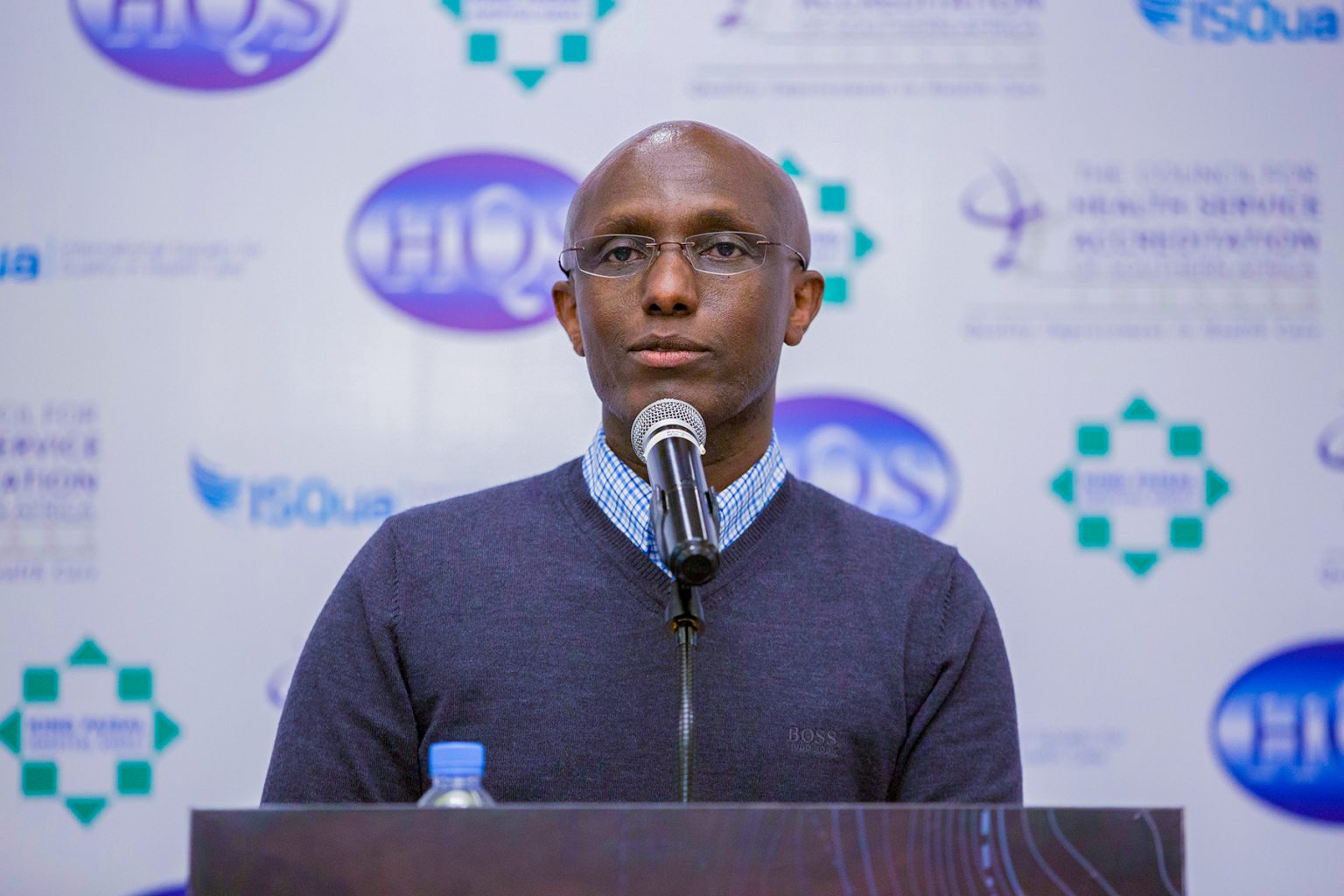 Dr David Nzanira, CEO of HQS Consulting who leads the facilitation of the quality improvement process at several hospitals in Rwanda.

Professor Miliard Derbew, newly appointed CEO of King Faisal Hospital Kigali, gave that assurance. He attributed the success of the hospital to constant collaboration with the COHSASA team. “We will keep the momentum and we are confident our standards will remain outstanding. Our first priority is the patient, and we will ensure standards remain constant.”

The accreditation journey of King Faisal Hospital Kigali in Rwanda began in 2006 when COHSASA conducted a baseline survey to assess the hospital’s level of compliance with accreditation standards. The hospital did not do well, scoring a mere 41 out of a possible 100.

However, from this low baseline emerged, over time, a hospital that has just been awarded the four-year accreditation against internationally accredited standards, making King Faisal Hospital Kigali the first healthcare facility in Rwanda to achieve this distinction.

The award means that King Faisal Hospital Kigali shares this position with an elite group of 56 facilities in Africa to have achieved a four-year accreditation to date, of which 30 are hospitals.

Four years after the first ever survey conducted and after much work by hospital staff, King Faisal Hospital Kigali scored an impressive 86 out of 100 at an external survey in February 2010 and received an Intermedial Level Graded Recognition Award. A mere nine months later, the hospital received its first two-year full accreditation award (conferred on 18th February 2011), scoring 99 out of 100.

The surveyors report at the time read: “It is evident that the culture of quality improvement and management has become well entrenched in the organisation, and quality management processes, which include clinical audit programmes, are now well-established throughout the facility. Physical facility requirements are not yet being met in all areas, but these improvements are being planned as part of the hospital’s upgrading plans.”

In 2013, the hospital once again excelled, scoring 99 out of a possible 100 points and was awarded a three-year accreditation in May 2013. Then there was a setback.

After a traumatic re-structuring process in the hospital which left many staff reeling, the hospital again delivered a triumphant result: 98 out of a possible 100 and they were awarded a three year-accreditation in September 2016. This three-year award was extended from September 2019 to March 2020 due to special circumstances surrounding changes in the governance and contractual arrangements for the management of the facility.

One week before South Africa was placed into lockdown during the 2020 COVID19 pandemic, an external survey was conducted at King Faisal Hospital Kigali. The hospital achieved a score of 98 out of a possible 100 and was accredited for four years.

Dr Edgar Kalimba, Former Acting Chief Executive Officer and present Deputy CEO of King Faisal Hospital Kigali who led the most recent accreditation process, said that over the many years of the facility’s involvement with COHSASA, the culture of quality improvement has become an entrenched part of everyday hospital routine.

“Accreditation has given us a structure within we can work. Staff know what they must do, how they must do it and how they can measure whether they have done it effectively. This makes governing and managing a hospital so much easier.”

He said the standards spelt out clearly and unambiguously what needed to be done. “The standards create a structure which sets the tone for everything we do.”

He said that COHSASA’s standards relating to infection prevention and control has assisted the hospital in the treatment and isolation of COVID19 patients who, although they are not actually treated there, are referred onwards to treatment centres established by the Ministry of Health in collaboration with Rwanda Biomedical Centre.

In a message sent to King Faisal Hospital Kigali, the CEO of COHSASA on the occasion of the accreditation ceremony, Ms Jacqui Stewart, said: “The four-year accreditation award recognises the healthcare facility teams that have demonstrated a real commitment to continuous quality improvement.  The recognition is for all of you – the King Faisal team that has demonstrated over the years that you really care about providing your patients with a high-quality, safe service that meets the best international standards.

“We know that it has not always been an easy journey, there have been major organisational changes over the years – but the spirit and the commitment of the multidisciplinary team has always shone through.

“You have shown that it is not about ticking boxes and getting a high score.  It is about real dedication to do the right thing every time – however busy you are.  In the current situation in which we find ourselves, with the coronavirus pandemic, this dedication to high quality care is even more important.  The value of the systems and processes that you have in place at King Faisal is now deeply appreciated.  It is the systems and processes and the commitment to quality that protect the patients and the staff.  Never take short-cuts – keep doing the right thing every time.”

Construction on the hospital had begun in 1987 and was completed in 1991 with financial assistance from the Saudi Fund for Development (SDF). It was designed as a 200-bed facility. During the Rwandan Civil War, the hospital dealt mainly with casualties but became a fully-fledged public health care facility thereafter.

In 1998 the hospital turned into a private for-profit – institution as part of an agreement between the Ministry, private shareholders and Netcare International. This agreement came to an end after nine months and the hospital obtained registered status as a not-for-profit entity with funding from SDF, ministerial subsidies and local revenue generation.

King Faisal is one of three regional/referral/academic institutions in Rwanda and operates as a fully-fledged acute care facility with fulltime specialists in most of the major disciplines with further development of tertiary services envisaged. It admits paying patients.

In April 2016 a Concession Agreement for five years was awarded to the OSHEN Healthcare Group to manage the hospital; however, this contract was terminated prematurely in April 2019 due to the fact that OSHEN did not honour the agreement regarding important aspects, resulting in a loss of income, reduction of personnel and substandard service delivery. Subsequently, the oversight of the hospital reverted to the Rwandan Government.

King Faisal is a major resource in healthcare provision in Rwanda and offers the highest level of care locally. It admits paying patients funded from different sources ranging from private healthcare funders (insurers) to government subsidies. The hospital operates Rwanda’s medical referral funds and coordinates any patient referrals from Rwanda to other countries as approved by the Medical Referral Board. This referral rate has dropped substantially over the years because of the success in developing local clinical expertise.

Upgrading of the hospital facilities has been on the cards for several years but this has now started with a major phased building project, to be followed by rehabilitation of the existing buildings.